You are here: Home / St. Margrethen

The first ECOCELL houses in the world

The four free-standing one-family homes in St. Margrethen are the first buildings in the world constructed using the ECOCELL FAST-BUILDING-SYSTEM developed in Switzerland.

The houses were designed by a local architecture office, and the initial plan was to build them using traditional methods. Because the planned free-standing one-family homes could not be sold off plan, the landowner at the time reached out to ECOCELL and enabled the erection of the first show houses based on the approved project. Slight adjustments and modifications were necessary to realise the building designs with the ECOCELL FAST-BUILDING-SYSTEM. 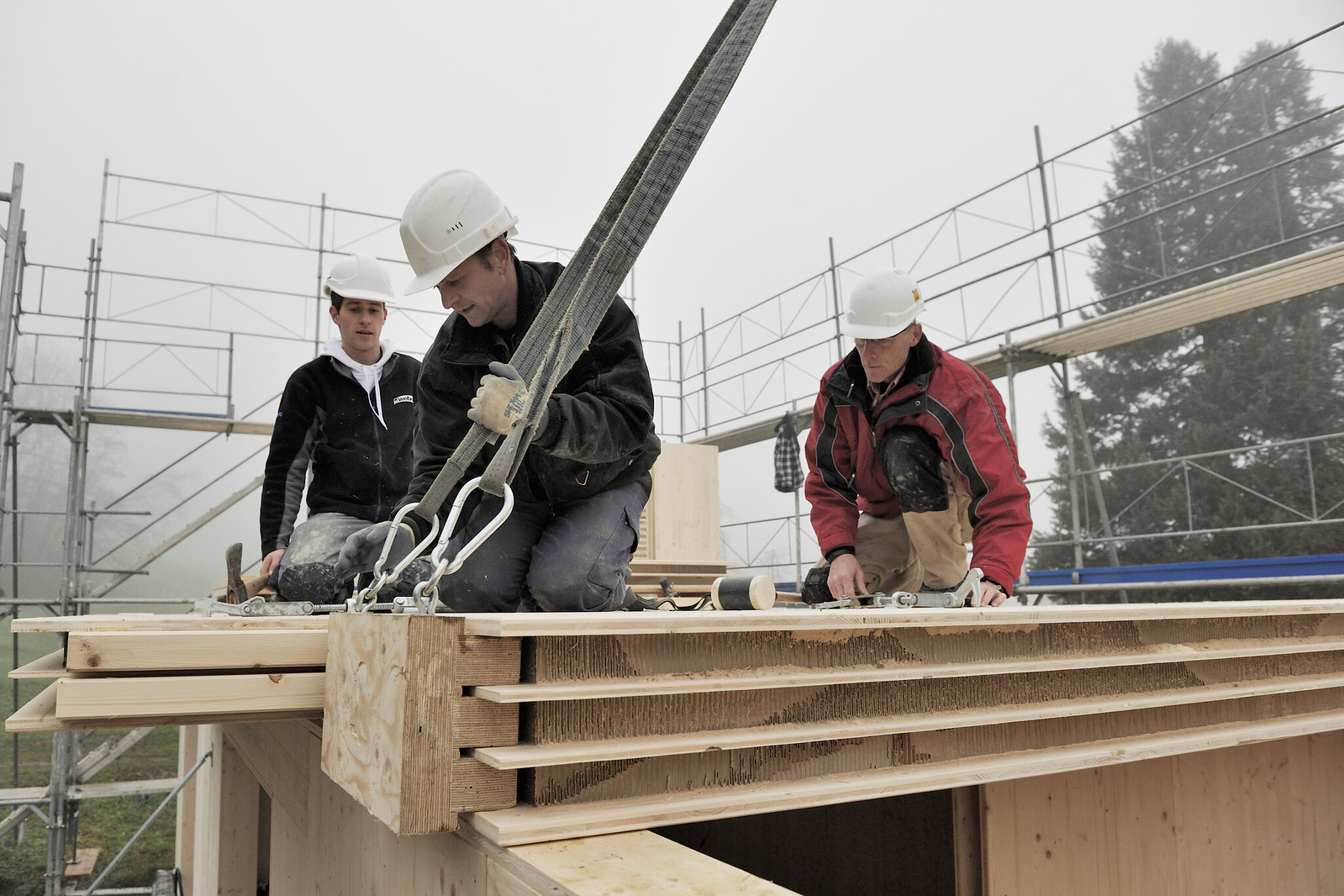 The ECOCELL construction system used in walls, ceilings and roofs

This was the first time that the ECOCELL FAST-BUILDING-SYSTEM was used for walls, ceilings and roof elements, i.e. for the entire load-bearing structure of the buildings.

The first two houses were built a few months apart. The two final houses in contrast could be built within the same week.

Because of the house width of 6.00 m, a ceiling construction without bearing pillars and beams was necessary, which was enabled by the first-time use of triple-layer ECOCELL construction elements. The ceiling elements with three honeycombs of 65 mm thickness each have a total height of 27.5 cm and enable a span of up to 6.00 m.

Luckily there was no time pressure for the construction of the houses in St. Margrethen, so trials with different construction materials could be conducted. One such trial was the use of adobe plastering. This seemed contradictory, as the entire house was built in drywall and this required the use of much water. The ECOCELL CONCRETE HONEYCOMB served as underlay for the adobe plastering. Grooves for electric cables were milled into the honeycombs as with brick walls. The application of the adobe plastering turned out to be very difficult and complicated, so in the last two houses the inside of the external walls was covered with a frame and gypsum boards. Since the large amount of water used does not correspond to ECOCELL’s dry construction method, we will probably not use adobe plaster in the future.

An important basic idea when designing and executing ECOCELL’s ECO Solar houses is maximising the generation of energy, up to energy self-sufficiency, by covering as much as possible of the entire exterior shell of the building with photovoltaic components. Due to the proximity to the village church, we had to respect the historical environment. In St. Margrethen it was therefore only possible to cover the roofs with photovoltaic panels. 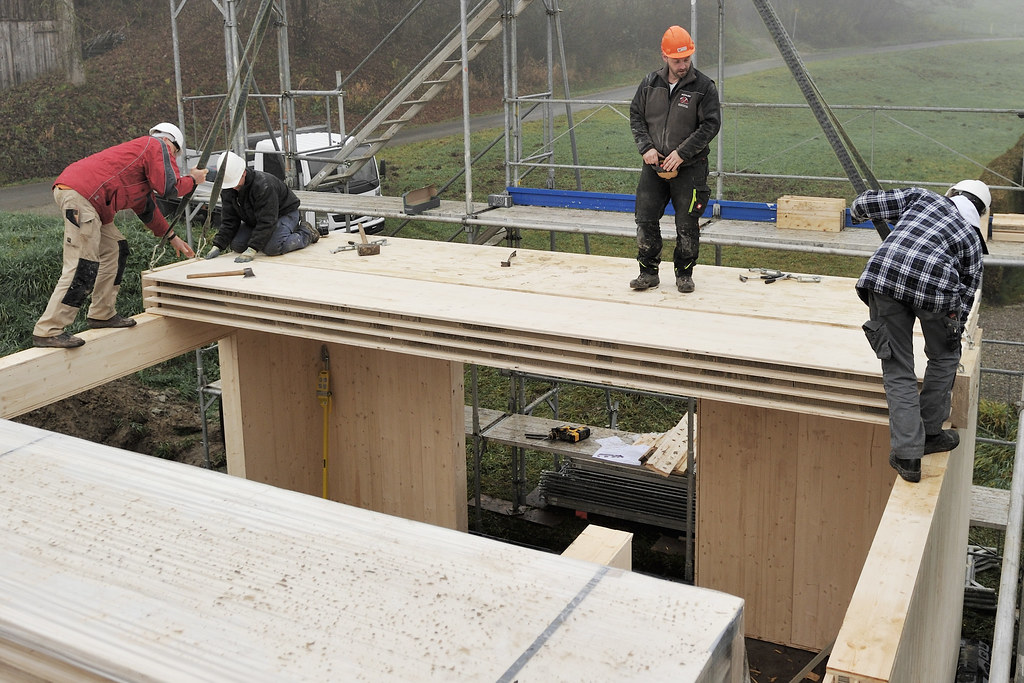 The construction in St. Margrethen is proof both of the versatility of the ECOCELL FAST-BUILDING-SYSTEM and of the architectural possibilities that the system offers.

In St. Margrethen, an already approved project was taken over; it was based on the design by the architecture office of Bänziger Lutze in Berneck. The owner of the land also believed in the ECOCELL FAST-BUILDING-SYSTEM developed by Fredy Iseli and exchanged the land against shares in ECOCELL. This was a perfect occasion for ECOCELL to demonstrate that it is easily possible to realise the projects of external architects using the ECOCELL FAST-BUILDING-SYSTEM.

The proximity to the church directly behind the “Pfarrguet” plot constrained the design. Unlike for the ECO Solar houses in Uttwil, the façades could not be equipped with the ECO Solar energy façade but had to be covered in a wooden shell. A horizontal wood lattice in grayed larch wood was affixed. This accentuated the house façade and emphasised the environmentally friendly character of the ECO-solar-houses.

According to our calculations, thanks to ECOCELL the construction of just the four ECO-Solar-houses in St. Margrethen-SG generated CO2 savings or substitutions of 185 tonnes compared to traditional construction methods, corresponding to the yearly CO2 emissions of over 100 cars.

ECOCELL wants to create affordable housing. For this reason, it was decided not to build basements for the houses in St. Margrethen-SG. The houses are instead equipped with a novel thermal foundation that is still not well-known in this region. The floor slab acts as a storage mass, and underfloor heating pipes run through it. The heating system uses an air-to-water heat pump and can mostly be run with the energy from the photovoltaic panels. We were able to offer the free-standing one-family homes with a net surface area of 110 m2 and an integrated garage at a price of +/- CHF 650,000 and sell them all within three weeks. 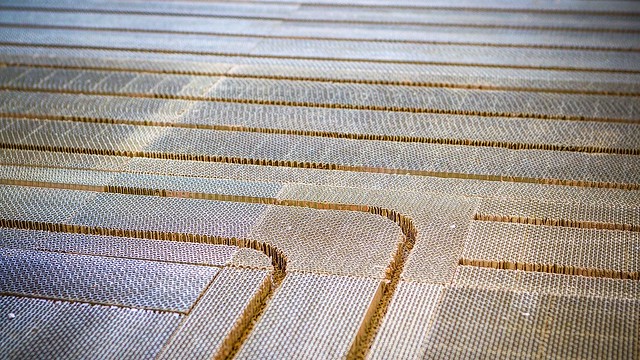