You are here: Home / Profile

to build with ECOCELL does not emit any CO2, but reduces greenhouse gases!

ECOCELL will start a MEGATREND in environmentally friendly construction

With ECOCELL, the architect and visionary Fredy Iseli has developed a ground-breaking, disruptive BUILDING-SYSTEM out of cost-effective high-tech composite materials that completely transforms current construction techniques. The new construction material requires neither sand nor gravel, and because it uses renewable resources it causes no CO2-emissions but rather reduces greenhouse gases enormously. Millions has been invested into the development of the new construction system, and over a dozen processes and inventions have been patented or have patents pending.

In the future, construction will have to be lighter, faster, cheaper, more sustainable and more environmentally friendly. Good alternatives to common solid construction are lightweight composite materials. These consist of a honeycomb structure with an upper and lower linerboard. The honeycomb takes up at least 75% of the volume and so represents by far the largest portion of the composite. ECOCELL has developed a procedure for the industrial manufacture of HONEYCOMBS. The entire honeycomb structure, made from 100% recycled paper, is covered with a mineral coating in a process covered by a global patent and then “petrified”. 90% of the ECOCELL CONCRETE-HONEYCOMB is air, and with material costs of under $ 50 per m3 it is by fare the cheapest construction material in the world, produced under industrial conditions. CONCRETE-HONEYCOMB is the first insulating material that can be statically loaded in its composite form.

ECOCELL produces standardised elements in production lines with millimetre precision. The individual wall, floor or roofing components, but also delivered parts such as windows and doors, come with standard locking pins. By simply locking together the various elements, one can erect complete, almost fully operational buildings in just a few hours. Since ECOCELL moves as much of the work upstream into the factory as possible, inefficient work at the building-site gets minimised.

The new building concept enables serial manufacturing of standardised elements and separates manufacture from the design and the building. Furthermore, ECOCELL can make a significant contribution to affordable housing. The innovative construction system received the GreenTec AWARD 2016 and the Swiss innovation prize IDEE-SUISSE Award 2018.

Proof of Concept (POC) achieved – ready for the industry

The innovative FAST-BUILDING-SYSTEM has achieved POC. The prototypes of the machines and production lines have been developed and tested and have proved themselves with the production of the 0 series!

The ECOCELL CONCRETE HONEYCOMB, the HONEYCOMB-CONSTRUCTION-BOARDS and the ECOCELL FAST-BUILDING-SYSTEM, built out of it have been inspected and tested! The first ECO-Solar-houses in St. Margrethen-SG and Uttwil-TG have been built and are inhabited! ECOCELL is therefore beyond the start-up phase and is ready for the growth market. It is now looking for investors who share the values and visions of ECOCELL and want to join ECOCELL in taking a leading role in the “new” construction industry, securing a significant market share and simultaneously making a significant contribution to protecting our planet. 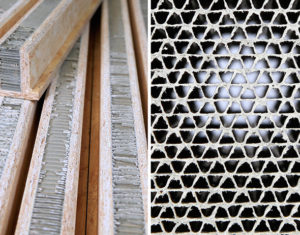 more “wood out of wood”

With the industrial production of the CONCRETE-HONEYCOMB and with material costs of barely $ 35 to $ 45 per m3, the lightweight composite technology will dominate construction sites around the world.