You are here: Home / ECO-Solar-House

Based on the ECOCELL fast construction system, ECO Solar modular houses are designed with a sustainable, clever, holistic energy concept. The energy optimisation of the architectural design due to the covering of the entire exterior shell is such that ECO Solar modular houses generate more electricity than they use. Excess electricity is either stored in batteries or fed into the grid. This is where the ECO Solar energy façade developed by ECOCELL comes in. 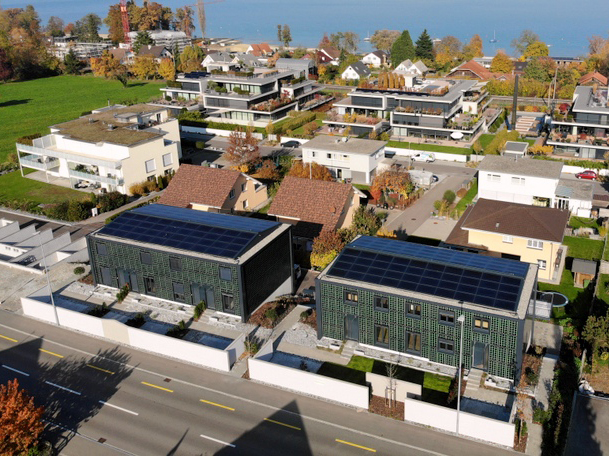 We were able to purchase a 2,500 m2 plot in Uttwil, right by our offices, in order to build the first terraced home estate with ECO Solar houses in accordance with our goals and ideas. This allowed us to adapt the design to the ECOCELL construction system already during the early project phases.

The narrow plot, right by the main road, was well-suited for the construction of the first ECOCELL show houses. The construction consists of four structures of similar sizes on which we had the first opportunity to use the entire exterior shell of the buildings to generate solar electricity. The entire roof and façade surfaces were covered with photovoltaic elements.

The ECO Solar energy facade newly developed by ECOCELL acts like a cloak for the building. An open ECOCELL BETONWABE covered by an advancing shell of glass with integrated photovoltaics surrounds the building. The sun warms this shell, produces electricity and reduces the temperature differential between interior and exterior or even eliminates it. The house is in a warm environment even in the winter and loses no heat to the outside, because if no heat is lost, none needs to be generated. In summer it does not get too warm because the honeycombs cast shade on themselves when the sun is high. The construction in Uttwil was the first time that we were able to combine the system of transparent heat insulation with photovoltaics and so also generate electricity from the façade.

ECO Solar energy facade as advancing facade with back ventilation.

ECOCELL has developed an insulation panel, consisting of a silicate panel and a honeycomb panel, which, when a transparent, vapour-permeable sheet is attached, can be used as an insulation panel for a back-ventilated transparent heat insulation system. The insulation panel newly developed by ECOCELL consists exclusively of mineral materials, except for the transparent sheet, and is therefore fire-resistant as well as being much faster and cheaper to produce than traditional systems. By sealing the honeycombs with a transparent but vapour-permeable sheet, the façade system can be equipped with back ventilation, which prevents the warm air between the honeycombs from being sucked out by the suction effect of the air circulation.

In houses 3+4, the ECOCELL building elements for the bathrooms were already equipped with acrylic resin panels during production. Required drilling and lathing could therefore already be done during production together with a preassembly of the bathroom elements. Extensive work on the panels and sanitary installation work on site could thus be avoided, since the work could be prefabricated more simply and cheaply.

The construction of each new building in Uttwil also allowed us to continuously develop the ECOCELL fast construction system. In the second house, we equipped the windows with our locking system. This made it possible to join the windows like large LEGO blocks during assembly, just like the other elements of the house. ECOCELL delivers the corresponding profiles to the window and door manufacturers, who apply them during production, turning the windows and doors into ECOCELL building elements and so allowing them to be directly joined together on site.

CO2 savings correspond to the yearly emissions of 250 cars.

According to our calculations, thanks to ECOCELL the construction of just the four ECO Solar houses in Uttwil generated CO2 savings or substitutions of 450 tonnes compared to traditional construction methods, corresponding to the yearly CO2 emissions of over 250 cars.

The experience from the construction of the first two houses, and the change in the energy law, drove us to form an energy or consumer community for houses 3+4. This enables us to store the solar energy in a central battery, feeding less excess energy into the grid and using more of it ourselves.

The residential units forming an energy community draw their electricity directly from the central battery through an electricity meter. Since the heating is adjusted through individual air conditioners, the required electricity also flows through these meters.

In addition, upon request the ECO Solar houses can be equipped with electric vehicles and a special “vehicle to grid” charging station. This technology offers the residents the mobility of an electric vehicle, which makes for a good second car. The battery of the electric car stores the solar electricity generated during the day and returns it at night for direct use in the house rather than feeding it into the grid. This enables the highest possible utilisation of the generated solar electricity.

ECOCELL creates sustainable living spaces, at affordable prices, in which people like to live and spend their time.

The first of this type were erected in St. Margrethen as free-standing one-family homes. The second ECO Solar house constructions are currently being erected in Uttwil.

Further projects at various locations are in the planning stage, some in partnership with large developers.